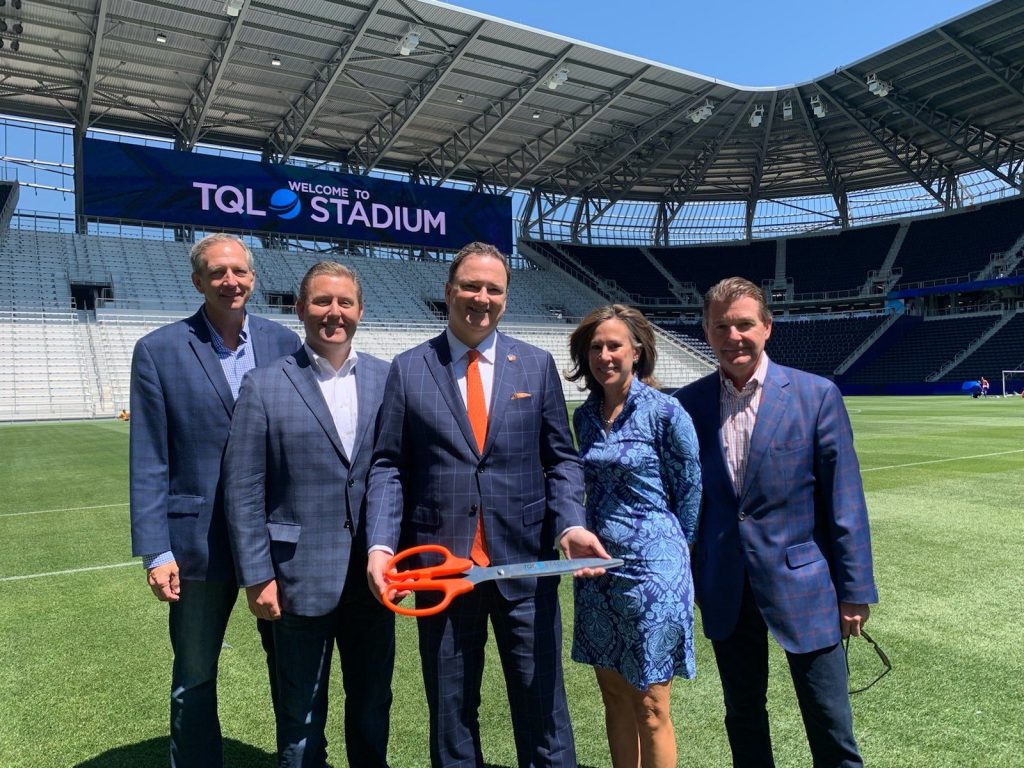 FC Cincinnati opened the TQL Stadium, a 26,000-seat venue which boasts a striking presence that connects two historic neighborhoods – Over-the-Rhine and West End – and positions the venue as an “Ambassador to the Queen City” while giving fans a spectacular game-day experience inside and out. FC Cincinnati and its construction management team Turner/Jostin received the “Creating Economic Inclusion with Intention” award from the Cincinnati USA Regional Chamber and Cincinnati Business Courier.

The continuous seating bowl of TQL Stadium is designed to harness the noise and energy of the fervent FC Cincinnati fan base.

“We are proud to cut the ribbon to officially open TQL Stadium, an iconic, instantly recognizable, world-class MLS stadium,” said Jeff Berding, president of FC Cincinnati. “TQL stadium will proudly represent Cincinnati across the nation and on the world-stage.”

Raising the Bar in Stadium Design

The design of TQL Stadium intentionally harnesses the energy of a dedicated fan base to bring a world-class soccer experience to Cincinnati. The stadium is wrapped by over 500 vertically-oriented aluminum fins, each fully programmable through a state-of-the-art integrated LED video display system. By night, the exterior comes alive offering a brilliant dynamic video display that showcases the club’s brand, atmospheric graphics and match-day messaging to energize fans on their approach to the stadium.

This one-of-a-kind stadium experience will raise the profile of the team, the league and the city. From the bold graphics of the programmable LED integrated façade to the continuity of the seating bowl and the wall of sound created by the safe standing supporters’ section on game day, the iconic experience of TQL Stadium will be unrivaled as it serves its electric fan base.

By day, the architectural fins which define the exterior façade create the stadium’s signature form: a singular twisting motion that signifies the tension between two teams about to take the pitch. When viewed straight on, they provide a glimpse into TQL Stadium, fostering a heightened sense of anticipation for the upcoming match. Inside, fans enjoy a 360-degree continuous seating bowl with no breaks, putting the focus on the pitch, similar to the sport’s most iconic European venues.

The Bailey, FC Cincinnati’s legendary supporters’ section, is situated in the North stands. Its 3,170 fans standing on a 34-degree slope, among the steepest in the league, create an imposing wall of sound over the pitch below and increase the intimacy of this vital seating section. Above The Bailey, TQL Stadium boasts the widest video board in any North American soccer-specific stadium. TQL Stadium’s 26,000 seats place it among the largest in Major League Soccer and its 300,000 square feet of canopy shields every seat from the elements.

The site for TQL Stadium was selected for its urban location that provides connections to all corners of Cincinnati. The West End and the nearby Over-The-Rhine (OTR) districts are two of Cincinnati’s most historic neighborhoods, each with their own distinct flavor and energy. While engaging and energizing the city, it was always a priority to be a good neighbor throughout the design process. The height and orientation of the venue were designed to minimize shadows cast on the surrounding neighborhood while the first-of-its-kind programmable LED façade primarily faces east to respect nearby residents to the west.

“This is the biggest investment in a hundred years in the Historic West End,” said Cincinnati Mayor John Cranley. “TQL stadium will be an iconic part of the city’s architecture and beauty, and the whole world is going to see it on a more regular basis.”

The stadium is mindful of both day-to-day activity and the match day pageantry that take place outside its gates. Among the many considerations informing its orientation has been the club’s passionate base of supporters with their traditional march-to-the-match that attracts thousands and arrives from the east. As a result, the stadium features an expansive East Plaza with a grand staircase that faces the Over the Rhine neighborhood and serves as a front porch and a means to channel fan energy.

Rounding out a total package that combines tradition, community and innovation, the premium spaces at TQL Stadium reflect the city’s rich architectural heritage. The Tunnel Club uses elegant materials such as teak wood and warm tones reminiscent of institutions like the Cincinnati Music Hall. The back shelving of the club’s bar was inspired by the jaw-dropping five-story stacks of the Old Cincinnati Library.

The First Financial Club, inspired by Over-The-Rhine and the city’s brewing traditions, is designed with a fresh take on the conventional beer hall. A massive two-story, 1,000-square-foot brick feature wall anchors the space, reminiscent of the labyrinth of 19th-century beer vaults that lies beneath the city.

In a nod to the team orange and blue color palette, the design team programmed a contemporary interpretation to express the bold hues. Copper and brass materials take the place of orange, creating warm tones while paying homage to the city’s industrial history. The thematic overlay of the Cincinnatus Club, named after the city’s Roman emperor namesake, exemplifies this approach. In place of the team’s blue, a muted dark navy hue is seen throughout the stadium from common areas to the suites to the seating bowl.

“We created an experience at TQL Stadium that transcends the functional and technical aspects the building,” said Isabelle Rijnties, lead interior designer for the project. “By carefully considering how users will experience the space, we created an emotional connection to the event, building and city through interior details. While the seating bowl is where fans experience the raw energy of the live event, and considerable attention is paid to that element, the aesthetic of premium and public spaces further enriches the experience of every fan.”

Superintendent Iranetta Wright is “not afraid”