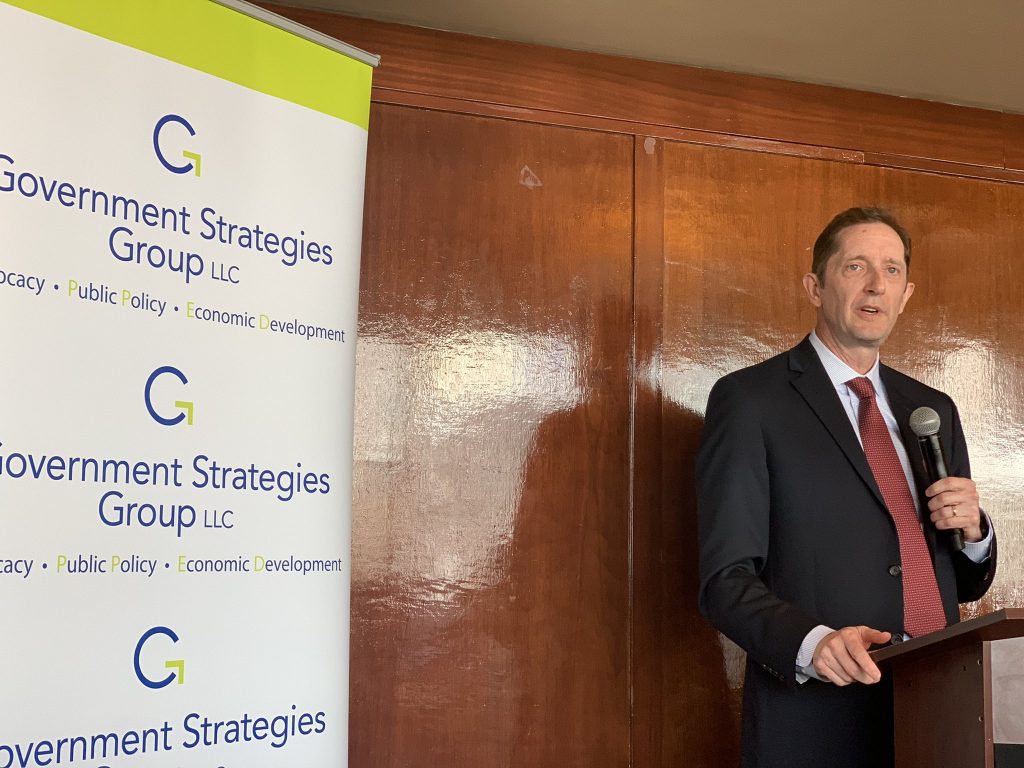 Government Strategies Group recently welcomed Interim City Manager John Curp at a luncheon held in downtown Cincinnati overlooking Fountain Square. Curp was appointed by Mayor Aftab Pureval and Cincinnati City Council in January. Curp previously served as City Solicitor from 2008 – 2014 before moving to a private law firm. In late 2021, he was tapped by Mayor Pureval to serve as his Interim City Manager while the Mayor’s national search for a permanent City Manager continues. Curp is a candidate for the permanent position.

Cincinnati’s city government operates as a Mayor-Manager form of government, with the Mayor and City Council setting policy direction and the City Manager overseeing day-to-day operations. Mayor Aftab Pureval spoke to a GSG lunch in February and shared his vision and policy priorities for the city. John Curp noted his role is to provide confidence to the community that the day-to-day operations of government are as free from political interference. He believes the newly elected City Council has been especially respectful of that division in our government.

Coming out of COVID, Curp said the city administration has been operating in silos. He is committed to breaking those silos down by encouraging cross-department interaction and bringing all department heads to the table to collaborate. He noted recruiting and retaining talent is a challenge for city government as well as the private sector. He wants young people to come up through the ranks and see public service and government services as a good career path.

One of Curp’s priorities is community engagement. “As the Mayor and I are telling people, it’s not a cliché for this Administration, it is something we are going to live by,” he said. The city is working on its community engagement plan now and wants the community to truly feel that they have a voice in their government, especially those who do not feel like their voice is heard. The first test for this new desire for community engagement will be hiring a new Police Chief. The city will hire a consultant to coordinate a city-wide engagement process. While the hiring of the Police Chief is Curp’s decision, he hopes there will be community consensus around the best candidate, including a public town hall with two finalist candidates answering questions from the community.

Regarding the budget, Curp laid out a critical situation. He shared that in 2025 the city is projected to face a $50 million decrease in earnings tax revenue due to COVID remote working. The city’s projected growth is expected to be $12 million, leaving a large projected deficit. To offset the expected future deficit, the administration will recommend that the Mayor and Council hold back the remaining American Rescue Plan Act (ARPA) dollars to fill the reserves. The administration encouraging businesses to bring their employees back to work, revitalizing our business districts and increasing the city’s income tax revenue stream. The Administration is looking at how to package development deals to attract businesses and create jobs.

Curp acknowledged that Council’s top priority has been affordable housing. He pointed to a recent success with the Macy’s project which will bring 300 new housing units to downtown in the former corporate headquarters office space.

Curp’s remarks were well received by the audience, many who had worked with him when he served as City Solicitor. “We’re in good hands,” said Chip Gerhardt in closing remarks.

Superintendent Iranetta Wright is “not afraid”