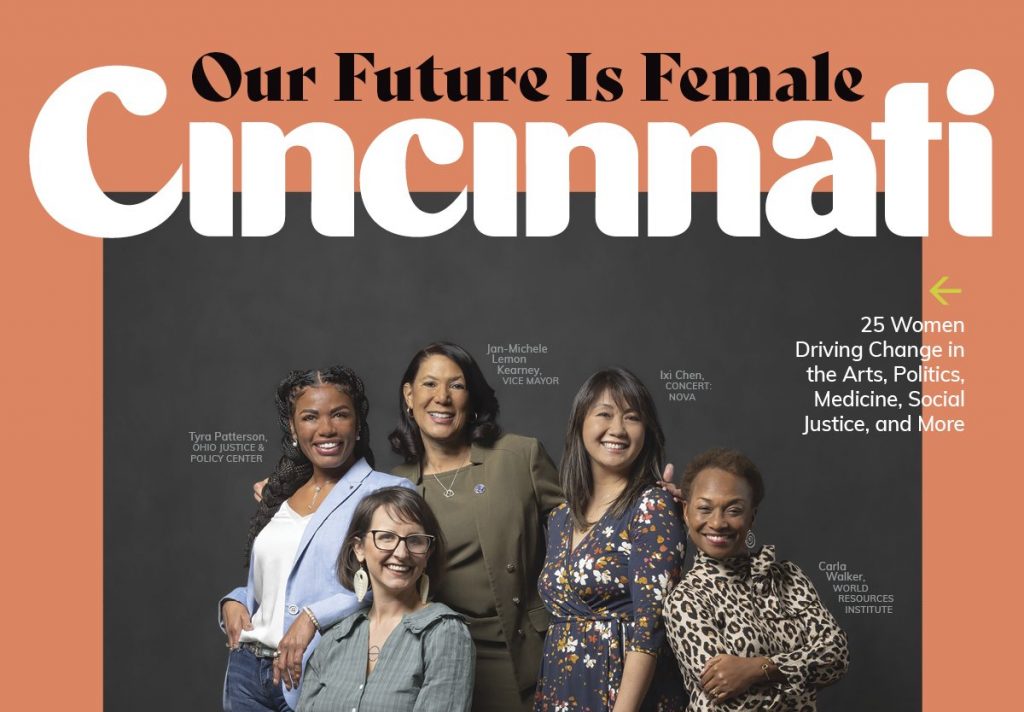 At Government Strategies Group, we value the work of our clients in their local communities and the role they play in shaping Cincinnati. We are proud to announce that the April edition of the Cincinnati Magazine’s “Our Future is Female” issue featured several our clients. We would like to take the opportunity to recognize the work of these women and honor them for their accomplishments.

Colleen Houston, the CEO and artistic director of ArtWorks, has been a leader in creating public art around Cincinnati. ArtWorks began in 2007 with the goal of creating more public art in the city – at the time, the only mural was the Homage to Cincinnatus mural. Today, Houston uses art to engage the community and bridge cultural divides across different people. She says that when she grew up in Cincinnati, many kids did not have a sense of pride for the city. In recent years, she has been struck by how many people have moved back and have come to appreciate the value of Cincinnati, largely because of public art. Houston believes public art, as simple as it may seem, helps to create meaning and beauty in people’s lives. To learn more about Colleen Houston and ArtWorks, visit https://www.artworkscincinnati.org/about-us/meet-the-team/

As CEO of the Cincinnati Museum Center, Elizabeth Pierce leads the center in creating community engagement and learning opportunities for visitors. She values the relationship between the museum and community members and works to build people’s trust with the museum. After interning at the Florence Nightingale Museum in London, Pierce was inspired by how museums can tell stories and give context to events. She loves how unique and engaging museum experiences are and how her job never fails to keep her mind stimulated. She says it is important to stay curious and to continue looking for ways to bring the community into the museum experience. To read more about Elizabeth Pierce and the Cincinnati Museum Center, visit https://www.cincymuseum.org/meet-our-leadership-team/

Sarah Weiss, the CEO of the Nancy and David Wolf Holocaust and Humanity Center, works to continue the legacy of Holocaust survivors who came to Cincinnati to rebuild their lives. She has devoted her career to creating empathy in Cincinnati, just as Holocaust survivors did many years ago. The museum and humanity gallery trace the stories of “upstanders” — those who use their assets to combat injustice and make a difference in the world — not just during the Holocaust, but also in the world today. Weiss says that her strengths are honesty, love of learning, curiosity, and leadership. She uses these strengths to encourage others to become upstanders and to promote empathy and justice in Cincinnati. See more about Sarah Weiss and her work with the Nancy and David Wolf Holocaust Humanity Center at https://www.holocaustandhumanity.org/staff-board/

The head of Film Cincinnati, Kristen Schlotman, works to bring the film industry to Cincinnati. A Cincinnati native, she grew up seeing the cultural influences of the Cincinnati Ballet, Cincinnati Symphony Orchestra and Opera and wanted to make film a pillar of the community in the same way. She says the success of film in Cincinnati means that people have full-time jobs in the field and that nonprofits, film groups, and degree programs at local colleges are taking off. Schlotman feels confident that the film industry is taking hold of Cincinnati because of the success of groups and organizations like Women in Film, Black Cinema, and the University of Cincinnati’s film degree program and film center. Learn more about Film Cincinnati at http://www.filmcincinnati.com

“Our Future is Female” also recognizes several elected officials who are creating positive change in Cincinnati politics. Through their inspiring stories, these women create more space for women in politics and encourage other women to get involved.

Hamilton County Commissioner Alicia Reese has been a trailblazer for women in Cincinnati politics for many years. Before being elected as a commissioner in 2020, she served at the Ohio Statehouse, Cincinnati City Council and as the Vice Mayor of Cincinnati, becoming African American woman to win county, city, and state races in Hamilton County. Reese says she wanted to be Commissioner to deliver results and help people; she recognizes the key role that the commission plays in delivering support, services, and opportunities to Hamilton County residents. As the youngest woman to ever win a seat on Cincinnati City Council, Reese understands the challenges of being a young, African American woman in politics. She says she wants to be remembered as someone who got things done, created opportunities, allowed more people to participate, and generated change. Her goal is to give everyone an equal chance and to pave the way for future generations.

Vice Mayor Jan-Michele Lemon Kearney also knows what it is like to be a woman in politics. She encourages women to use their voices and speak up for what they believe in, even if they are the only woman in the room. Kearney was sworn into Cincinnati City Council in March of 2020, right after the pandemic hit, which she says was disorienting. Within her first few months on Council, she began working with The Center for Closing the Health Gap and the NAACP, was confronted with the death of George Floyd, and saw the needs of people during her first budget cycle. She identifies gun violence, especially among the youth population, as a major issue for Cincinnati and has worked to use policy to get to the root of the cause. Kearney says that it is important to remember that City Council exists to serve the people and wants to make City Hall more accessible to everyone.

As Hamilton County Sheriff, Charmaine McGuffey works to demonstrate the impact of women in law enforcement. She was elected sheriff in 2020, becoming the first openly gay sheriff in Ohio and one of only three women to serve in the position. She feels that the position comes with a big responsibility to be an example for the rest of Ohio and to create a long-term legacy. She remembers when law enforcement was not accessible to women and understands the challenges of being the change in a field that often resists it. McGuffey also emphasizes the importance of diversity in making law enforcement more relatable to the public and in allowing police to work with different communities throughout the county. Through training and policy adjustments, McGuffey has worked to change policy culture and reform criminal justice. She believes that criminal justice reform and law and order do not have to be opposed to one another but can work together.

Mary Wineberg, who was elected to the Cincinnati Public Schools board in the fall of 2021, wants to speak for students who otherwise would not have a voice. Before serving on the board, she was an Olympic gold medalist and a teacher for more than eleven years. She sees her background as a teacher as an asset and uses it to approach issues in a different way. As a teacher, she saw how many families struggled to make their way through the public school system and suffered from the lack of communication from schools. As a board member, Wineberg works to ensure equity in education and create trust between families and the district. She promises to use her skills, motivation, tenacity, and perseverance to make Cincinnati schools better for all children. She wants students to see her as a role model and recognize that they might one day become board members and improve the school system too.

Many of our region’s top projects to watch in 2023 have something in common: DSG

As the new year gets underway, the lists highlighting the top development “projects to watch” in our region for 2023 have recently been in the